In May 1838, volunteer troops from Macon County, North Carolina, established Camp Scott as a temporary base to support the capture of Cherokees from isolated communities in the Nantahala River Valley. These militia sent most of the detainees to Fort Butler (present-day Murphy) and, from there, to deportation camps in Tennessee. At the end of June, however, the volunteers’ terms of service ended. When the soldiers dispersed, they left behind 30 to 40 Cherokee prisoners. Most of these Cherokees fled into the mountains, where they joined other fugitives. After removal, they joined the Cherokee communities at Qualla Town and Sand Town, helping to form the nucleus of the present-day Eastern Band of Cherokee Indians. 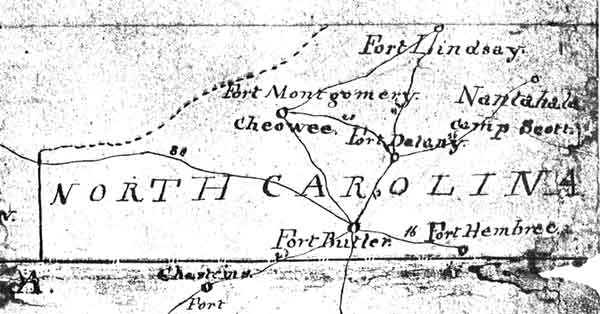